Let customers speak for us

I ordered 16 rolls of this for a 24’x30’ deck that I was building. Immediately upon opening the rolls I was impressed by the quality of the materials. Yes it’s a bit expensive, but you get what you pay for and it’s cheap compared to the replacement cost of a deck. The top of the tape is very durable, the bottom is insanely sticky and will adhere to anything it comes in contact with- so be careful and don’t place it anywhere you don’t want it to stay for good. I placed the tape down and then didn’t get back to the project for 3 weeks- the tape didn’t peel off at all and didn’t fade in the sun. It’s a great product and I will be ordering more for my next product. 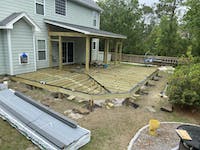 While in the process of a routine touch up on our second story balconies the contractor discovered that all of our 4x10 beams that came out of our ceiling of our home were rotted to some degree . this scared us to death bc we didn’t want to redo everything so we got 2nd, 3rd and 4th opinions and the damage was superficial but did need a rebuild around the beams so i made sure we did whatever we could to help protect all the beams from future water damage. I researched all different types of tape as it’s sold on amazon and at the big box stores and got to understand the difference materials for the tape and the sticky part and Imus’ tape is polyurethane and the sticky stuff is butyl which is the highest quality and easiest to use AND since we went with high end Timber Tech Azek composite (pvc) floor boards it was important that the tape and the butyl would not damage the boards which it does not. so i am thrilled we went with Imus and didn’t go cheap. for a few bucks more you get easy to work with tape that doesn’t piss off the contractors and you’ll have peace if mind. and they had different widths which we bought one of which bc we had sisterboards. plus when i texted the company for tech support they responded immediately. love this tape. 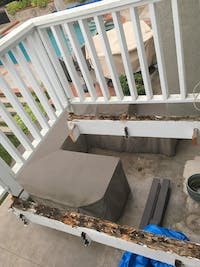 Great product. Do yourself a favor, don't build a deck without Imus products.

The joist tape exceeded my expectations. It was easy to apply. It even stuck to damp wood. This tape really made the deck sound solid when walking on it. Will use this on all future deck projects. 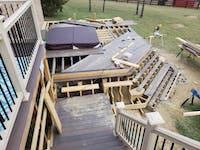 I’m using this tape as I replace deteriorated deck boards on my 25-year old cedar deck. Prior to Imus Seal I’d used the silver window seal tape, but A. Because of its width, wasted a lot of tape on the 2 by joists , and B. The silver was visible and unattractive to see through the gaps in the deck boards. Imus Seal is exactly the right width and is basically invisible between the boards. It’s also very easy to apply. 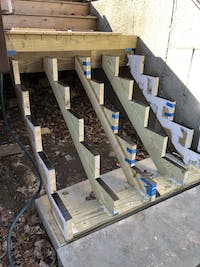 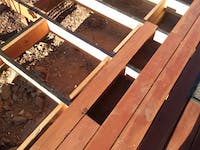 The project involved resurfacing a 2000 square foot deck adjacent to and surrounding a pool. The deck was over 30 years old and had been built in stages, none to code. After removing the cedar planking some joists and all of the posts needed replacing. One comcern was that the joist tops were compromised from removing nails and screws with the old decking. We knew joist tape was the answer and tried three vendors before deciding on Imus. Quite simply it stuck like bubble gum, the backing came off effortlessly, and the price and service were excellent. As a note, the cedar planking is being planed, stained, and reused as the fascia for the project. Pictures include two fox pups that were quite interested in our project. I'll add a picture or two when completed. 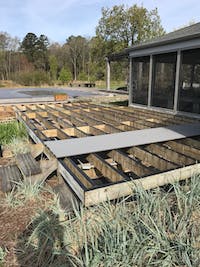 While researching DIY deck construction methods it became clear that adding a joist tape would prolong the life of the substructure. Imus Seal is an easy to use product that fits with the perfect amount of overlap on the joist. 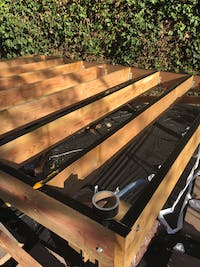 New Non-Skid version of Imus Seal Butyl Joist Tape released. How does it compare to the original?

On February 12, 2018 we launched Imus Seal Butyl Joist Tape, a self-adhering deck flashing tape designed to protect the wood joists and beams on deck structures from water damage and... Should pressure-treated wood deck structures be flashed to prevent rot?

Pressure treated wood continues to be a popular material for deck building in the United States, primarily due to its perceived cost and availability. A recent study of professional users of decking products (made up mostly of repair and... How to prevent deck rot and extend the life of joists and beams.

Many homeowners are aware of deck rot and attempt to avoid the costly water damage to their deck by using composite decking or other wood alternatives. Unfortunately, the importance of protecting the deck structure, most notably the...